Gluten Intolerance Symptoms - So Much More Than Digestive Issues 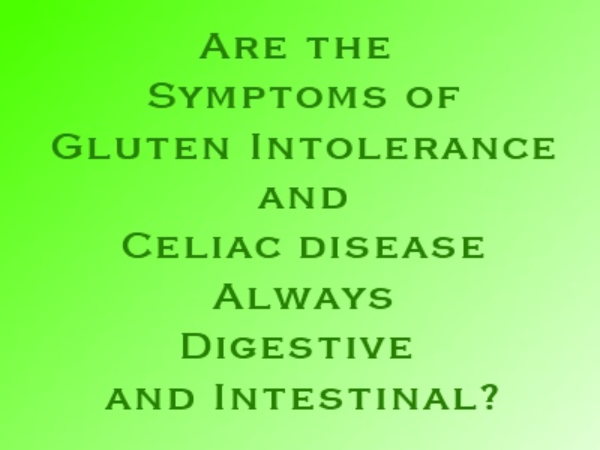 When I first was told my daughter had celiac disease nearly ten years ago, I would have answered this question simply by saying nausea and digestive issues.

But now I've come to realize there are so many different ways gluten can affect the body, and many have nothing to do with digestive or intestinal issues.

A few years ago, a program aired on television called Mystery Diagnosis. One particular episode was about celiac disease, and it completely changed the way I looked at gluten and celiac disease.
The program focused on the case of Eamon Murphy. In 1996, when Eamon was three months old, his mother noticed his eyes didn't track and that he sometimes wouldn't react to sounds. At one, he had difficulty chewing solid foods. By two, he had missed development milestones such as walking and talking. By the time he was three, and starting nursery school he was noticeably behind developmentally. Then he began to have transe-like episodes where his eyes would glaze over and he'd rock back and forth and talk to himself.
The doctors thought he had seizure disorders and wanted to medicate him. But fortunately, his mother Lisa listened to her instincts and began researching. Lisa had already been diagnosed with celiac disease and followed a gluten-free diet, but when she asked her doctor about the possibility of her children having celiac she was told, "They'll have the exact same GI symptoms as you and you'll know it."
But not all cases are of gluten intolerance and celiac are digestive and intestinal as was once thought to be true. Also in the 1990's, they were just beginning to uncover the genetic connection between celiac disease and that it often affected family members. It's currently estimated that between 4 -12 percent of an affected person's first-degree relatives will also have the disease. (In my family; me, my daughter and husband have it, my brother, his wife - and all her sisters and their children - as well as my brother's three children and my sister's two sons.)
Luckily at a Celiac Support meeting, Lisa met with Dr. Peter Green, director of the Celiac Disease Center at Columbia University and internationally renowned expert on the disease (and my absolute favorite expert on the subject of all things celiac and author of Celiac Disease: A Hidden Epidemic) and he strongly recommended Eamon be tested for celiac. He tested positive for the disease.

Gluten destroys the villi and the result can be malnutrition and this can be the root of many issues. For Eamon not absorbing the vitamins from the food he ate, robbed his brain of important nutrients and caused cognitive delays and seizures.
Changing Eamon over to a gluten-free diet was life changing. The seizures stopped. Eamon came to life. He was more alert and quickly caught up developmentally and did well in school.

"No one knows your child better than you do. I mean the physicians they know the diseases and know how to prescribe medicines but they really also have to listen to what the mother is saying about a child. It's like a puzzle and they have to put all the pieces together." ~ Lisa Murphy

Gluten Intolerance and Celiac - So Much More Than Digestive Issues

This program has stuck with me all these years and I've thought about it often. Especially when my own daughter was having major mood swings and other behavioral issues that I knew were simply not the normal teenage hormones taking hold.

Makes you think. Without a doubt there's a whole lot more to what gluten does in our bodies than we know. It made me understand all my daughter’s mood changes and my own so much better.

Get Your Copy on Amazon!
eBooks

Why I No Longer Use Xanthan Gum
Glad To Have “My Daughter” Back – How Gluten Affects The Mind
Glutenized - What To Do When You're Sick From Eating Gluten?
GMO Corn and Stomach Pains
The Hard Part of Being A Celiac and Living a Gluten-Free Life
Allergic Reaction To Mosquito Bites - The Secret To Stopping The Itch